“Ask of Me and I will give You the nations as Your inheritance, and the utter most parts of the earth as Your possession.”  Psalms 2:8

Our first entry to Cuba was on November 21, 1993.  The invitation came from Pastor Enrique Pedrosa.  Seem so long ago, but God by His design takes time to prepare what event He plans for the best of His people whose heart are set toward His Glory and Praise.  On that mission trip to Cuba, Jose and I traveled with Pastor Miguel Salas.

The changes between now and then are amazing to say the least. Pastor

Miguel Salas with his lovely wife Sandy, were the team leaders on mission trip to Havana, Cuba in February 2015.  Jose, together with Pete Klumpp, Mark Prehoda, Jay Prescott, and Matt Massey all from Houston, and David Pascua from Wilmington, North Carolina rendezvous in St. Petersburg, Florida. Pablo Urgelles, flew from Miami to Havana.  Four of them were going for the first time and what they were to learn are inspiring to hear. 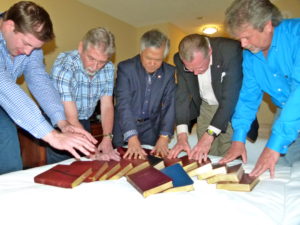 Mark Prehoda: “I wish I learned the Spanish language before I went, I would have a better grasp of the conversations. I found the Cuban people, very kind and hospitable.”

Pastor Jay Prescott: “I have been to Cuba and ministered to believers there but this was different.  I saw for the first time the call of the Joshua Generation International Network.  They help open the door for others in the body of Christ to minister to the government leaders, the business, the education, and the church leaders.”

Jose Pascua:  “ God made it clear to me that the country of Cuba was His and it is up to us to claim it as part of our inheritance. Everywhere we went, there were opportunities to pray and to bless people.”

David Pascua:  “I would go back to Cuba any time.  It would take me days to absorb the beauty of the people and the old city of Havana.”

Pastor Miguel Salas:  Lives were changed as well as ours.”

The itinerary presented to them by their hosts in Cuba explains why most of the time, they were back in their hotel past midnight as people were hungry to receive “spiritual food” from them.

It is in this kind of settings when people are bonded together in the love of God – having a view of how the other people live their lives in the midst of restraining circumstances.

When Jose and David and I (Joyce) came to America, the believers in Oregon, welcomed us with open arms.  Jose spoke in many churches in Oregon and into the Washington area.  This would be the first time that he would return to minister there since 45 years ago.

“Thank you so much for your willingness 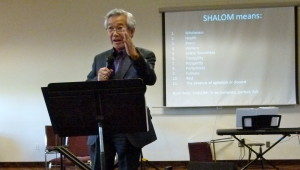 to give of yourselves in ministry to our Lord and to His saints in Oregon last week.  the Oregon Prayer Summit was a resounding success!  I believed the spirit- world in Oregon was greatly shaken and the Lord is gearing up for battle on behalf of His saints there.”  Pastor Gene

“Thank you for your presence in our city.  We are forever changed…thank you for bringing the understanding of SHALOM.  May the city of Salem be Shalom.  Thank you for your son David, honoring you and your wife releasing you.  Our city will forever be changed!  So grateful.  Dahlia and Mike

Nepal, how can we forget what the Lord has done for the nation of Nepal! In 2007, we set foot on Kathmandu, the capital for the first time.  We were welcomed warmly by our host Pastors, two brothers, Raju and Ragendra Sundas.  We had the joy of ministering to many pastors, government leaders at a Dinner Banquet, hosted by the Joshua Generation International Network and the Hossana Church in Kathmandu.

To see the pictures on TV after the earthquake tragedy, made the tears flow.  We have walked the land and met mighty men and women of God.  We traveled to places beyond Kathmandu – Damak, Phokara, and Hetauda, Chitwan.

Thank you so much for your financial gifts that were transferred to the pastors in Nepal to help them at this time of great need.

We were able to communicate with four pastors thus far.  Their homes were destroyed and they are living in shelters, “…with no toilets, no running water, no food, no electricity…”  one pastor messaged us.

Thank you for your obedience to the Lord.  Our response to the Holy Spirit’s prompting in us can make a difference in the lives we touch for God’s glory and praise!